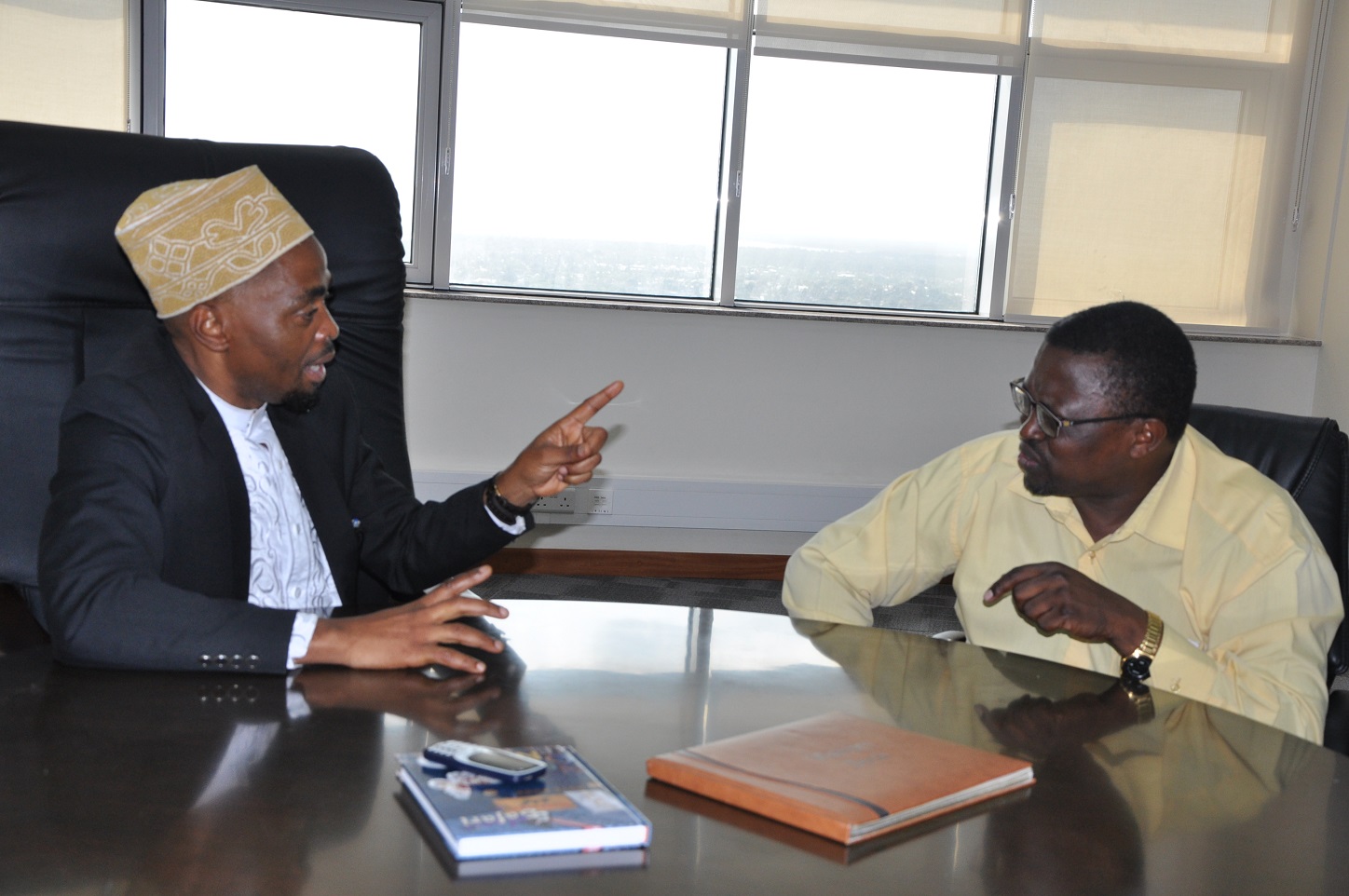 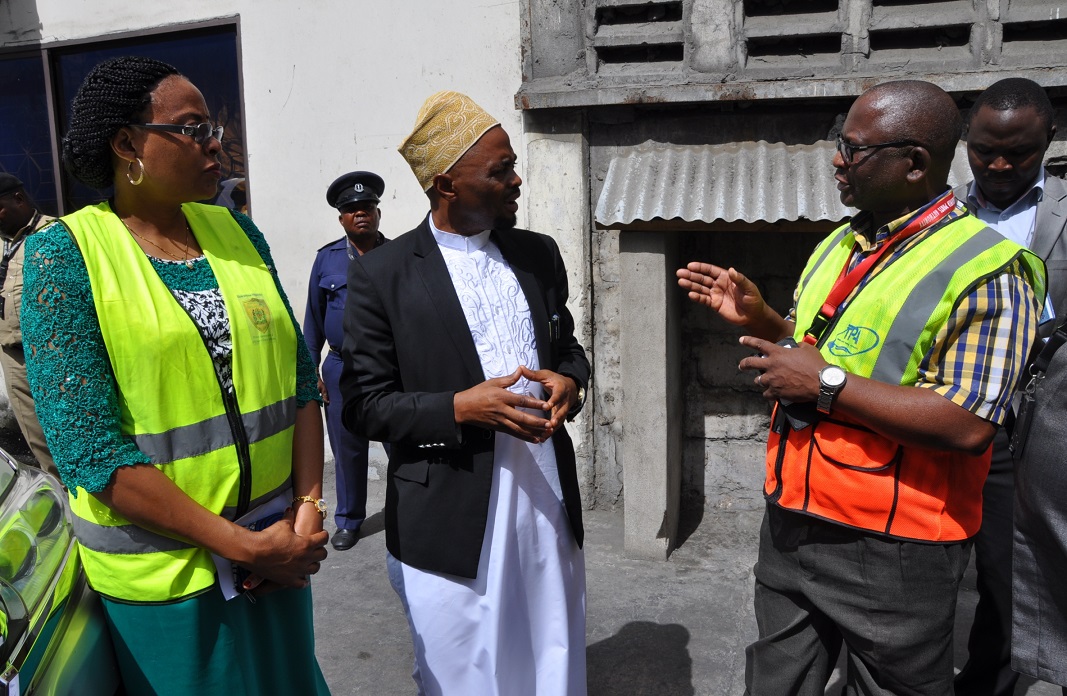 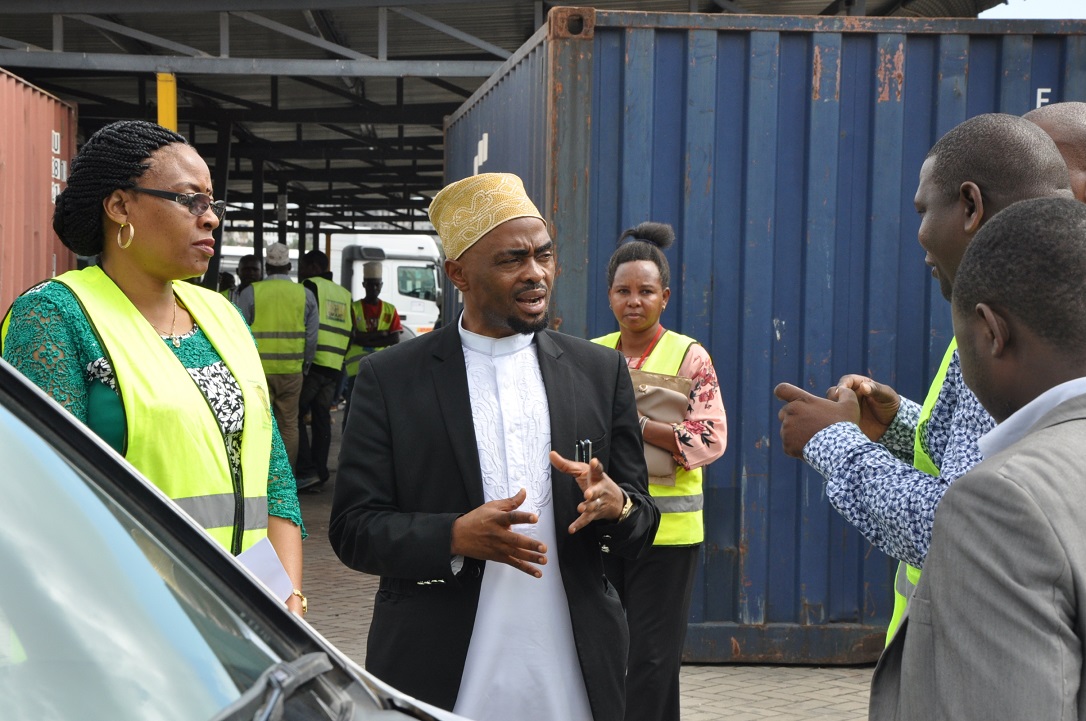 WORKS and Communications Minister Makame Mbarawa has directed all institutions providing logistics services at the Dar es Salaam port to harmonize their systems in linking them with the new scanners under installation.

“I want you to hand over to me your work plan on how your systems can be connected with the use of the scanners which have cost lot of public funds which should bring impact,” Prof Mbarawa told the institutions when visited the port to inspect the scanners yesterday.

He gave them until Friday this week to meet and discuss on how they would harmonize their systems to enable them operate effectively, directing the TPA’s Director Eng Deusdedit Kakoko to chair the meeting.

Prof Mbarawa explained that the government has plans to install a total of 12 new such scanners at major ports of Dar es Salaam, Mtwara and Tanga, aiming at scanning all cargo imported through the ports for safety and economic reasons.

The scanners would be scanning vehicles and other consignments to be transported by railway, including containerized cargo. The scanners were purchased following President John Magufuli’s order to the TPA to procure the equipment.

His order in 2016 was after he witnessed only two TPA scanners out of four functioning, creating loopholes for tax evasion by importers through false and under declaration of goods.

Some TRA and TPA officials were also beneficiaries of the poor cargo scanning system, a trend that irked the President. With the procurement of the scanners, it is hoped that the scanning of goods at the ports would be carried out quickly and efficiently.

For his part, Eng Kakoko said six scanners had already arrived and promised to implement directives by the minister. He said immediate steps to take they will speed up a process to link all scanners so that they read from a single point. 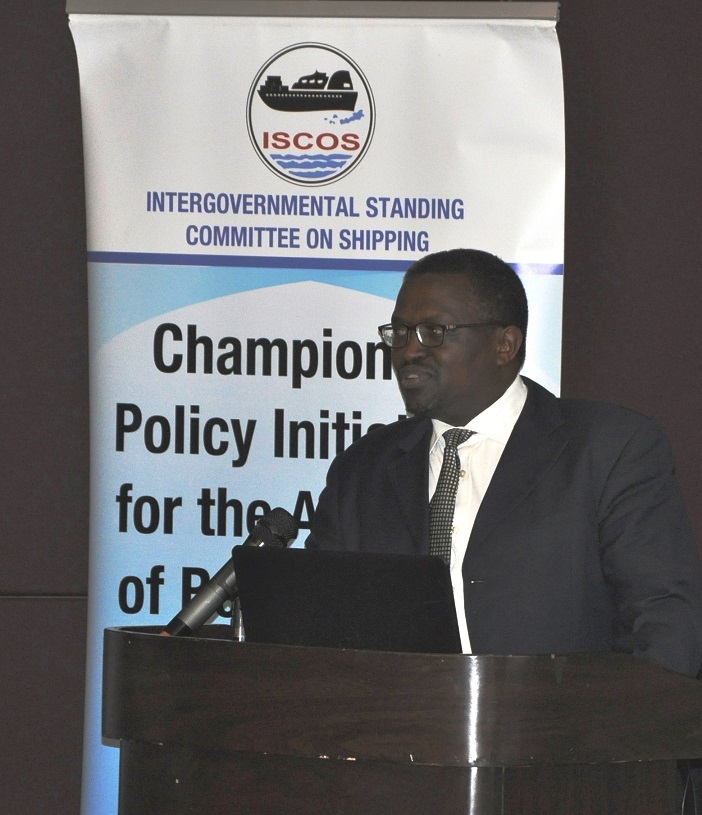 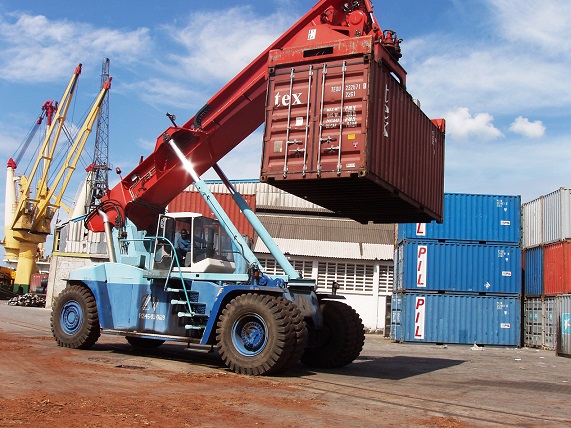 Dodoma — TRANSIT oil cargo through the Dar es Salaam port grew by 48.5 per cent in the first months of this year as compared to corresponding period last year.

According to the country’s Petroleum Bulk Procurement Agency (PBPA) data, transit fuel shipped through the port increased by 49 per cent, thanks to efficiency and reforms at the Dar es Salaam port.

“The agency is happy to announce that it has recorded a steady growth in transit fuel since the Bulk Procurement System was established in 2015,” PBPA Acting Director General Erasto Simon told the Parliamentary Standing Committee on Energy and Minerals here over the weekend.

During the 2016/17 Financial Year, the government scrapped off Value Added Tax (VAT) on transit cargo, subsequently fuelling the volume of containers handled at the port by 35 per cent. The Dar es Salaam port is increasingly becoming the traders choice.

Minister for Energy, Dr Medard Kalemani says the volume of transit cargo shipped via the Dar es Salaam port to the landlocked countries in the eastern Africa is projected to increase threefold.

President John Magufuli launched a 421 million US dollar project mid last year, targeting to double the capacity of the port with support from the World Bank and UK’s Department for International Development.

Assessment by the World Bank indicated that the port’s cargo handling grew by nine per cent annually.

The new expansion being implemented by China Harbour Engineering Construction Company (CHEC) will help increase the capacity of the port to handle at least 25 million tonnes up from 13.8 million tonnes a year

The new port adds up to already existing two oil terminal ports, one being Dar es Salaam and the recently launched Tanga port with capacity to discharge 35,000 tonnes.

CHANGE OF AUCTION AND INSPECTION DATES DISPOSAL OF OVERSTAYED 44 NO. TRAILERS AND 7 NO. MOTOR VEHICLES AT DAR ES SALAAM PORT 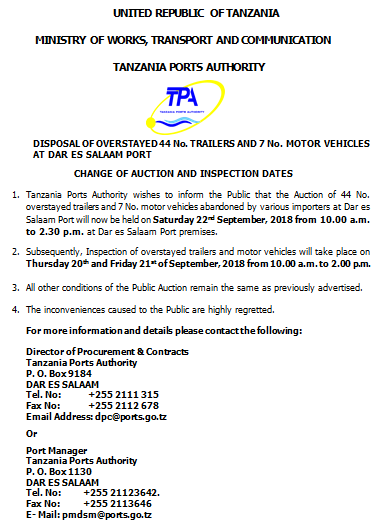 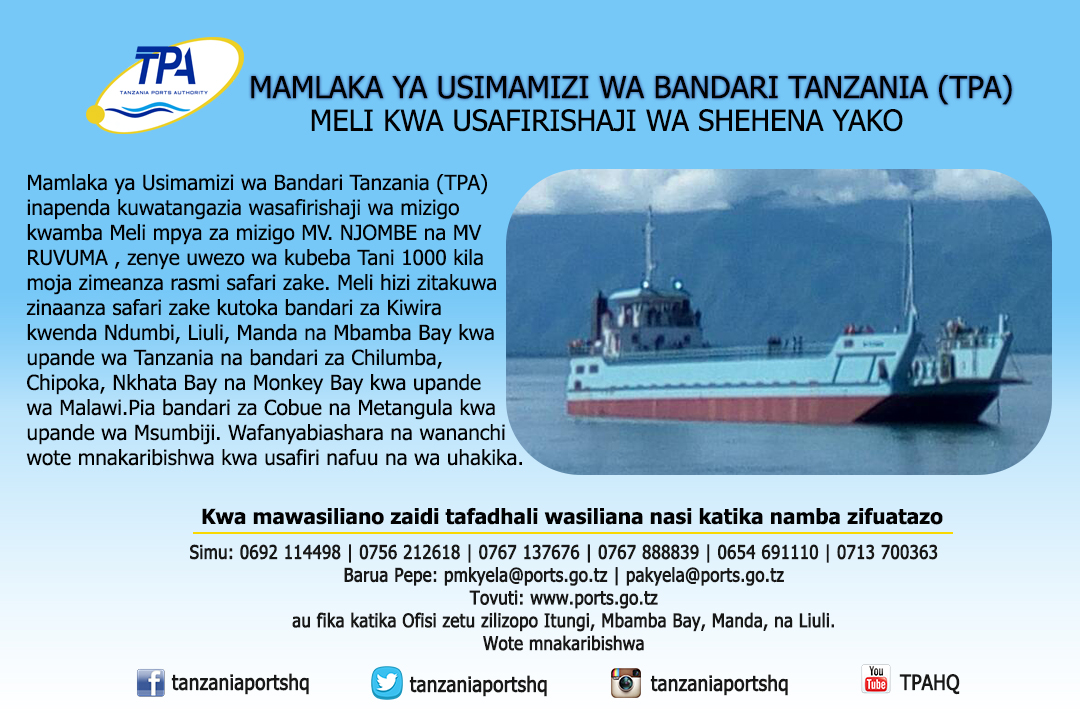 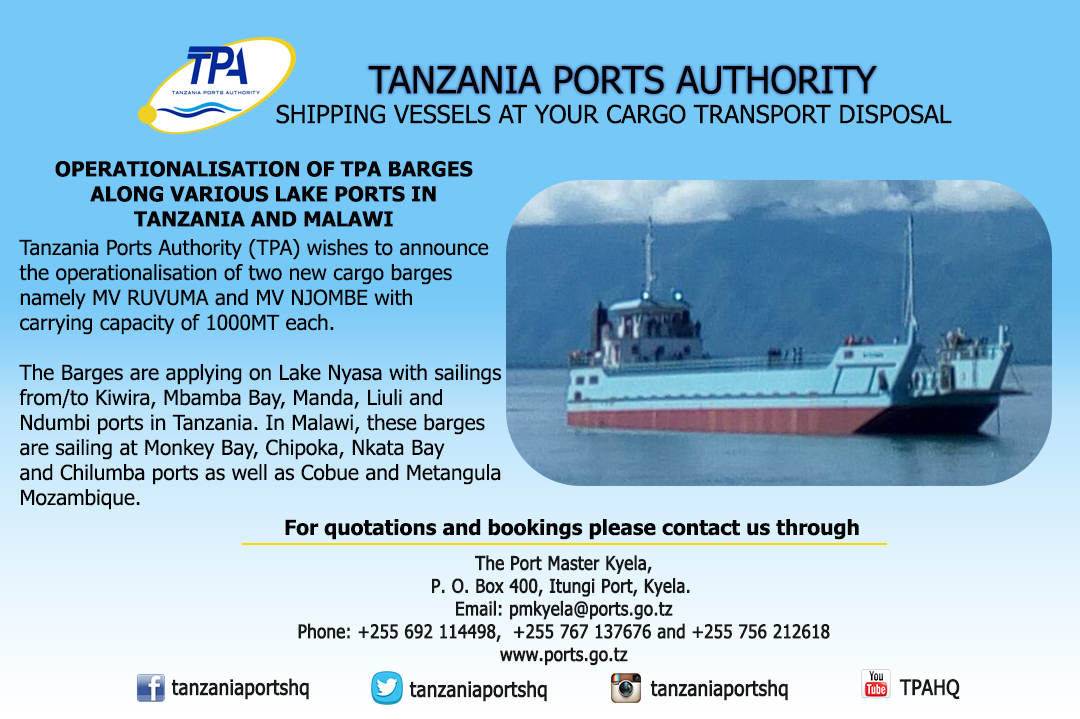 RWANDAN CARGO AT DAR PORT ON THE INCREASE The Dar es Salaam port has witnessed an increase in Rwandan cargo passing through the facility to at least 950,000 tonnes in the last year from 630,000 tonnes for the period of 2012/13.

According to Tanzania Ports Authority (TPA), the increased number equals to 9.9 per cent.

The TPA boss said presently cargo from Rwanda and other neighboring countries was stored within the port premises to ease clearance and ensure security of the cargo.

The Director General stated that in its strategy to strengthen business relations with customers, the government through TPA has allocated space for storage of Rwanda cargo at the Kwala dry port, in Ruvu and called for Rwandan traders to use that dry port for their cargo and the Isaka dry port in Shinyanga in order to reduce travel time. He said that TPA has already completed the construction of its liaison office in Rwanda for serving its customers from that country and was working on finalizing all procedures before official inauguration.

The Opening of the office will greatly help to strengthen our service to Rwandan customers who are using the Dar e salaam port,”Eng. Kakoko said. The Rwandan ambassador Kayihura thanked the government of Tanzania for providing them with space to store Rwanda cargo.

Ambassador Kayihura said the trade between the two countries had been steadily increasing in recent years after TPA had improved its services.

“Currently the Dar es Salaam port has been handling at least 90 per cent of all imported goods from Rwanda, thus putting a record of rapid increase of Rwandan cargo handled at Dar es Salaam port, ambassador Kayihura said.

The ambassador said his visit to the port was part of Rwanda’s efforts to strengthen trade relations between the two countries.

In its strategy to ensure that the authority is close to its customers, TPA recently took part at the International trade fair in Rwanda where, amongst other things, Officials met with the country’s traders who were satisfied with Dar es Salaam port services. 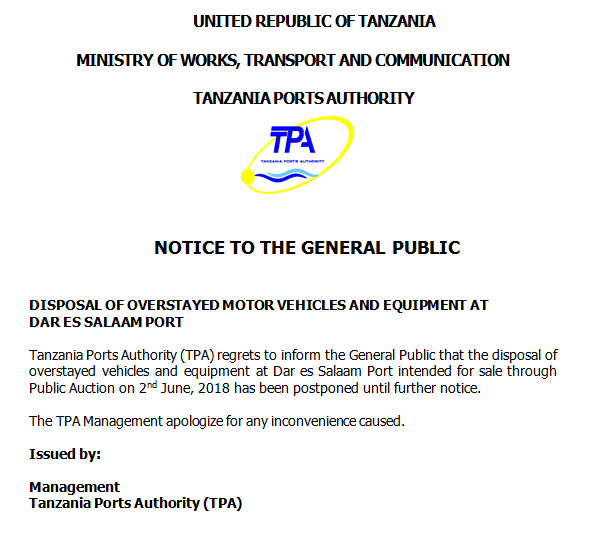 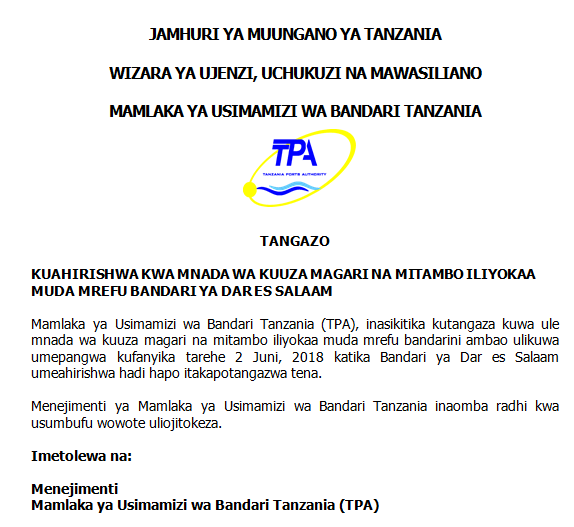 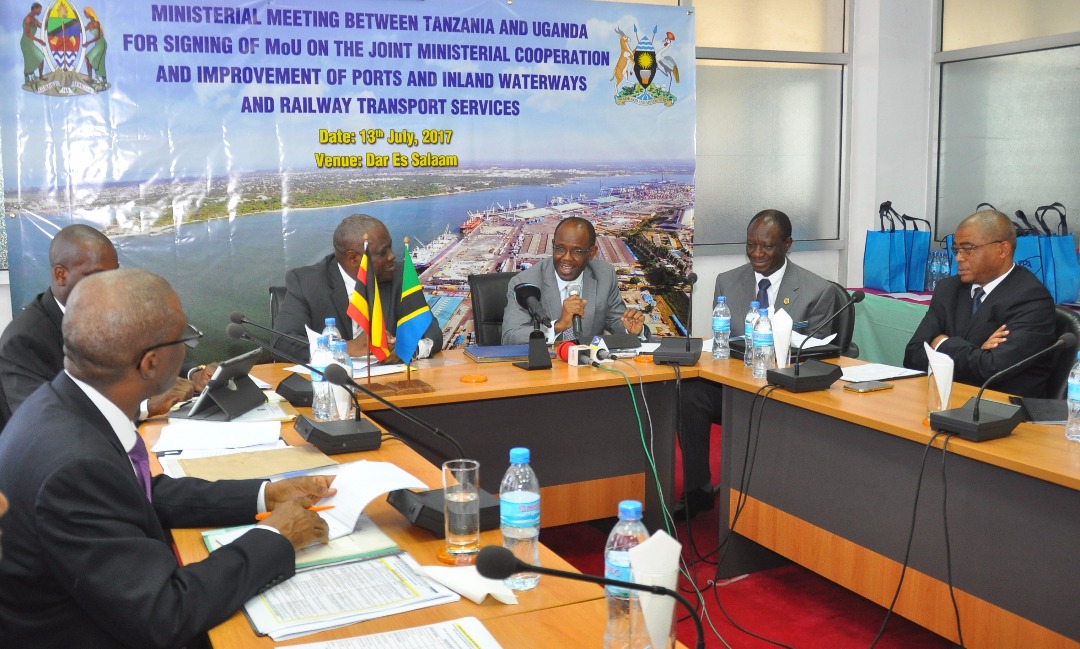 Uganda Minister of State for Transport, Hon. Bagiire Aggrey speaks to delegates during the event. 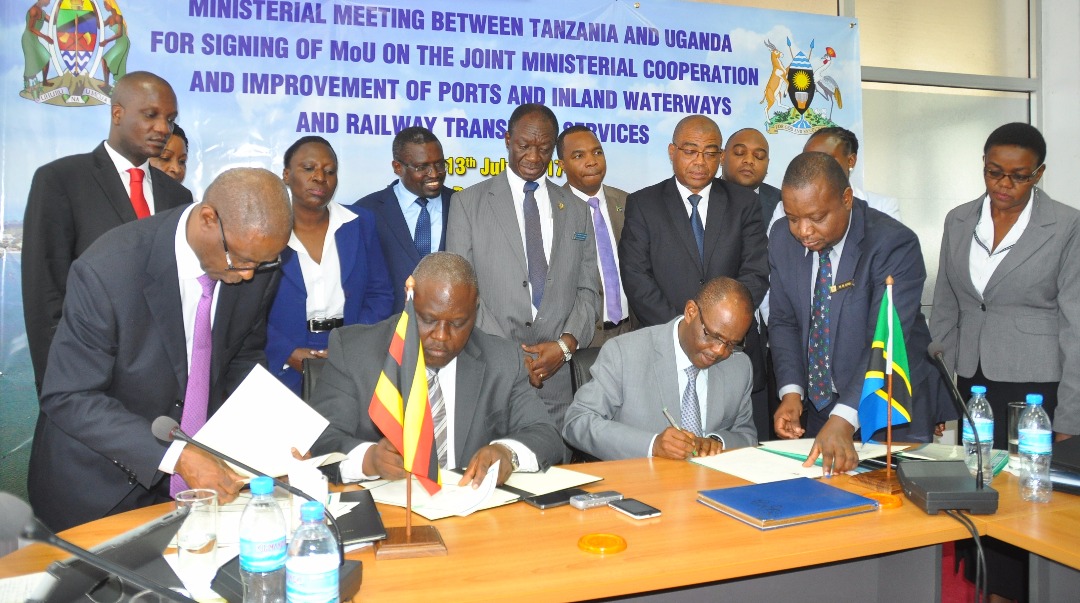 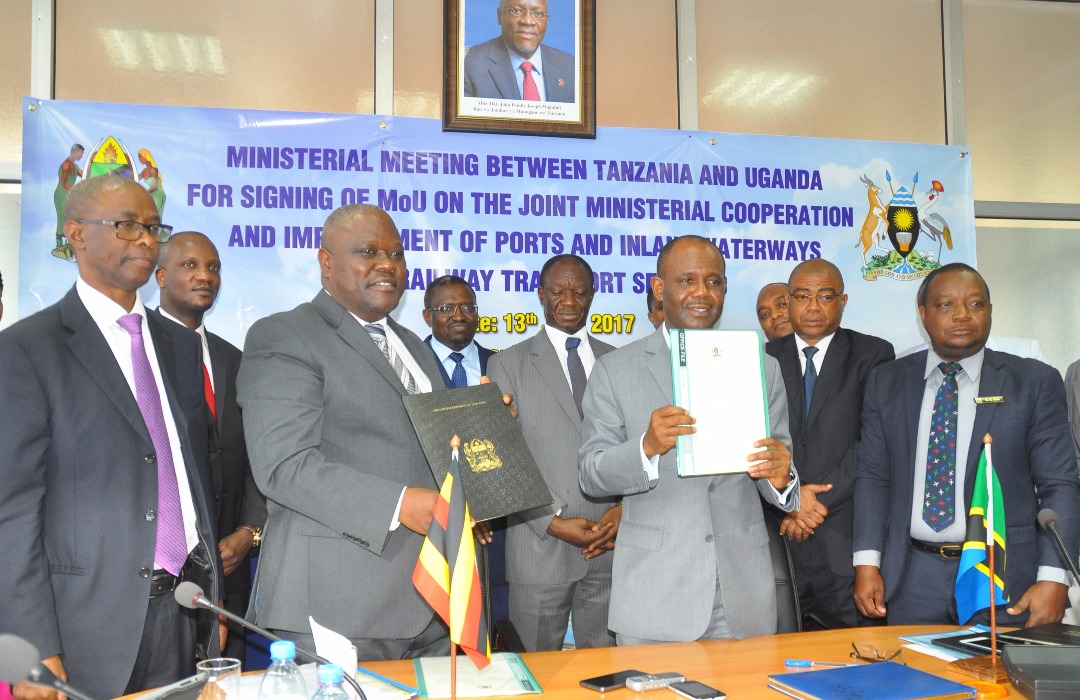 MoU signed between Tanzania and Uganda on the Joint Ministerial Cooperation and Improvement of Ports and Inland Waterways and Railway Transport Services.